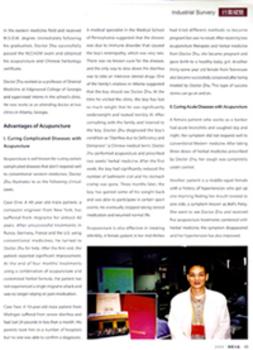 Zhu Lijian, the 29th Descendant of Zhu Xi, Talks of the Traditional Chinese Medicines and Acupuncture

The lines above, taken from the famous Prof. Cai Shangsi of Fudan University in Shanghai, well describes the connections between the two famous mountains and the two most distinguished philosophers i.e. Confucius and Zhu Xi. Fortunate for our readers, the host of our magazine this time is the 29th generation direct descendant of Zhu Xi (1130-1200, a foremost philosopher, ideologist, thinker, and literator) and his name is Zhu Lijian (Doctor Zhu).

As one of Zhu Xi's descendants, born in a family of literature, Doctor Zhu remembers in heart his forefather's proverb from his childhoods that "do whatever is good, and stay away from the wicked". He follows this philosophy all his life. As for the reason he has chosen to practice Traditional Chinese Medicine (TCM), he stated that it was his grandfather's enlightenment and his own childhood illness that engendered him a wish to become a doctor, so as to cure himself and others.

Born during the time of Chinese Cultural Revolution, Doctor Zhu has shown an intense interest in classical literature in his early childhood. While attending middle school, he won an Excellence Award in the Chinese Composition Competition of Guangdong Province, and had since written several novels. there is such saying that literature is the cornerstone while medicine is the structure, his excellence in Chinese classical literature made it accessible for him to study traditional Chinese medicine.

Doctor Zhu's great grandfather was also a famous scholar and healer born near the end of Tsing Dynasty. He created special healing formulas to cure certain female and children's internal illnesses, which had gained him a reputation in Guangdong province. Influenced by his family's medical practices and education, in his early years, Doctor Zhu has memorized Chinese medical classics such as Trimeter, Tang Tou Recipe, Secret Recipe Knowledge and other classical literatures of medicine. After graduated from high school, he enrolled in the Chinese National Acupuncture Training Center, where he studied from a renowned local Chinese medical doctor Zheng Murong. The clinical experience Doctor Zhu gained under the guidance of Dr. Zhen Murong helped intensify his interest in Chinese medicine. He also visited a number of medical experts in Fujian, Guangxi to broaden his knowledge in medicine.

Doctor Zhu's advancement in eastern and western medicines came about when he entered Guangzhou University of TCM and completed his undergraduate and clinical study there. Through three years' clinical practice under the supervision of the Director of Acupuncture Department, Prof. Fan Zhojing, in the Affiliated Hospital of Guangzhou University of TCM and renowned Profs. Peng Wannian and Liang Liuwen, he accumulated valuable clinical skills and knowledge and made enormous academic progress. In 2000, he was invited as a student representative to participate in the 6th National Symposium of Zhang Zhong Jing's in China and published a research article: The Inspiration of the Treatment of AIDS by Xial Chai Hu Tang (a Chinese herbal formula). These brought him fame and landed him a job at the Symposium.

After coming to the United States, Doctor Zhu enrolled in Dongguk Royal University in California. He graduated with highest mark in the eastern medicine field and received M.S.O.M. degree. Immediately following his graduation, Doctor Zhu successfully passed the NCCAOM exam and obtained his acupuncture and Chinese herbology certificate.

Doctor Zhu worked as a professor of Oriental Medicine at Edgewood College of Georgia and supervised interns in the school's clinic. He now works as an attending doctor at two clinics in Atlanta, Georgia.

Advantages of Acupuncture
I. Curing Complicated Diseases with Acupuncture

Case One: A 49 year old male patient, a computer engineer from New York, has suffered from migraine for almost 40 years. After unsuccessful treatments in Russia, Germany, France and the U.S. using conventional medicines, he turned to Doctor Zhu for help. At the end of his first visit, the patient reported significant improvement. After four months of treatments using a combination of acupuncture and customized herbal formula, the patient has not experienced a single migraine attack and was no longer relying on pain medication.

Case Two: A 10-year-old male patient from Michigan suffered from severe diarrhea and had lost 24 pounds in less than a month. His parents took him to a number of hospitals but no one was able to confirm a diagnostic. A medical specialist in the Medical School of Pennsylvania suggested that the disease was due to immune disorder that caused the boy's enteropathy, which was very rare. There was no known cure for the disease, and the only way to slow down the diarrhea was to take an intensive steroid drugs. One of the family's relatives in Atlanta suggested that the boy should see Doctor Zhu. At the time he visited the clinic, the boy has lost so much weight that he was significantly underweight and looked terribly ill. After consulting with the family and listened to the boy, Doctor Zhu diagnosed the boy's condition as "Diarrhea due to Deficiency and Dampness" (a Chinese medical term). Doctor Zhu performed acupuncture and prescribed two weeks' herbal medicine. After the first week, the boy had significantly reduced the number of bathroom visit and his stomach cramp was gone. Three months later, the boy has gained some of his weight back and was able to participate in certain sport events. He eventually stopped taking steroid medication and resumed normal life.

Acupuncture is also effective in treating infertility. A female patient in her mid-thirties had tried different methods to become pregnant but saw no result. After receiving two acupuncture therapies and herbal medicine from Doctor Zhu, she became pregnant and gave birth to a healthy baby girl. Another thirty-some year old female from Tennessee also became successfully conceived after being treated by Doctor Zhu. This type of success stories can go on and on.

A female patient who works as a banker had acute bronchitis and coughed day and night. Her symptom did not respond well to conventional Western medicine. After taking three doses of herbal medicine prescribed by Doctor Zhu, her cough was completely under control.

Another patient is a middle-aged female with a history of hypertension who got up one morning finding her mouth twisted to one side, a symptom known as Bell's Palsy. She went to see Doctor Zhu and received five acupuncture treatments combined with herbal medicine, the symptom disappeared and her hypertension has also improved.

The above real life cases illustrated the effectiveness of acupuncture in treating acute diseases. TCM has become widely known and accepted by western countries more than ever before.

TCM Has a Promising Future

Someone has questioned the effectiveness of ancient methods used in TCM in treating modern diseases. During the early years of his practice, Doctor Zhu had witnessed hesitation and skeptical in his patients; however, many left his clinic feeling relieved and satisfied. In fact, most of Doctor Zhu's patients came to him by referrals. Doctor Zhu has become aware that, "although we human have been exploring the outer space, a lot of mysteries and secrets about our own body still remain unsolved." How has TCM successfully solved so many clinical problems that conventional medicine has failed to respond? The answer is that TCM has had thousands of years of experience in treating human diseases, much longer than the history of any conventional medicine. Nevertheless, TCM is ever evolving and improving to adapt to human disorders and works extremely well on certain cases where it combines or supports the effect of conventional medicine and modern medical technology.

Doctor Zhu further shared his personal experience with our staff writer a case where TCM was used as a supportive treatment to conventional medicine. A college professor, who had been diagnosed with advanced stage stomach cancer and was told to have no more than a year to live. He suffered from persistent insomnia after surgery, which didn't answer to any conventional medicine. He was referred to Doctor Zhu by one of his students but remained very skeptical. However, by the time of his fifth visit, he couldn't stop praising Doctor Zhu and offering his sincere appreciation. He told Doctor Zhu that he could finally sleep for 5 to 6 hours each night, more hours of good sleep than he had in a long time. Eventually, this patient recovered from his surgery, regained his physical health and still alive today.

Close to the end of our interview, Doctor Zhu concluded that ancient TCM is gradually gaining wide acceptance and growing prosperously. He has dedicated himself to his patients' well-being and set a lifelong goal of returning health to those who suffer from diseases and discomforts. Finally, Doctor Zhu read us a poem, "Feelings upon Reading" by Zhu Xi, as encouragement for all of us:

A bright mirror has formed on the surface of a small glassy pool, There reflects a sparkling light from the sky and the wandering shadow of the clouds. How can the river be so lucid and pure? All thanks to its source and origin.


Note: By the invitation of the writer, Doctor Zhu expresses his wish to our journal, "I hope your honored journal can set a special column of "readers' mail box", so that the readers, patients and Chinese medical practitioners can communicate and exchange conveniently. I also cherish the hope that everyone can express and share his or her points and opinions actively, promoting and extending the influences of TCM culture at abroad. And this will be definitely a long-term and arduous task for every one of us." 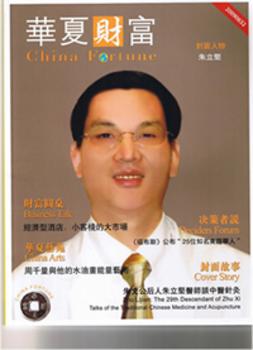 Also, Dr. Zhu was interviewed by the popular global Chinese magazine, "China Fortune" in November 2008 and was selected as “Cover Man” of this magazine in June 2009 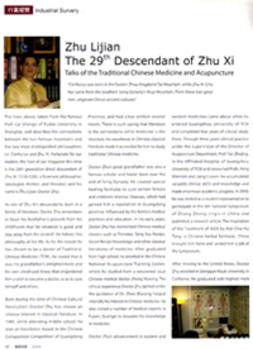 Dr. Zhu on aibtv
The only Chinese medical doctor featured on AIB Network in 2013 on AIB Presents: Traditions in Wellness.